Effectiveness of the Turbo Luminance

The medical monitor with high brightness and high contrast expands the visible difference in between high to low brightness. It greatly enhances the identifiable grayscale gradation and makes it possible to find lesions with low contrast, which is especially effective in mammography diagnosis.

For improving diagnostic efficiency, JVC has developed Turbo Luminance function that boosts the brightness to about 1000 cd/m2, which is close to the maximum value of LCD panel performance, for a certain period of time, even though it is a color monitor.

The comparison results on 3 settings

To verify the effect of Turbo Luminance function, we measured the contrast response time in 3 different settings:

ii. only the brightness is maximized (Fig.3) 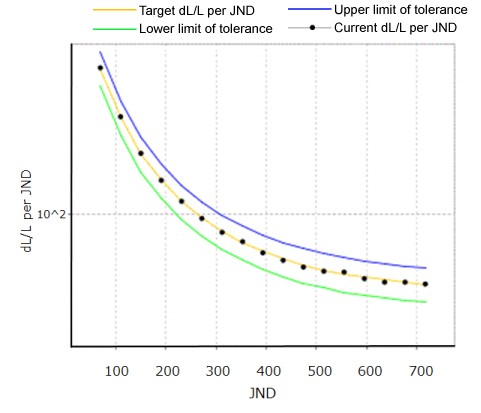 There is almost no deviation in the measurement result "●" with the target yellow line gamma curve. 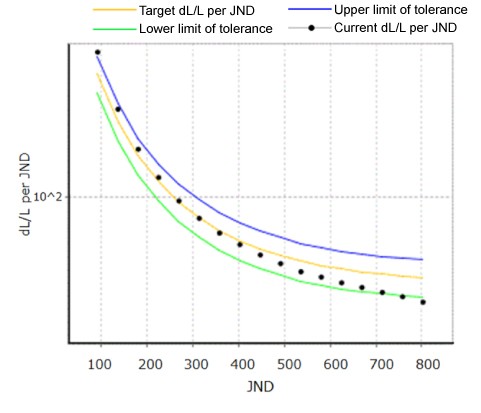 Fig.3 Only the brightness is maximized

There is deviation in the measurement result "●" with the target yellow line gamma curve.

Fig.4 Turbo Luminance function is ON

There is almost no deviation in the measurement result "●" with the target yellow line gamma curve.

*JND: Just Noticeable Difference, is the minimum luminance that a person can detect.

Turbo Luminance function can significantly improve the visibility for diagnostic imaging.It greatly extends recognizable grayscale gradation while retaining the DICOM GSDF gamma curve which required for the characteristics of diagnostic images. That assists for initial pick-up for the lesions, furthermore it improves the reading workflow.