Resolution of modality devices has already achieved a pixel size of approximately 25 to 100μm and a pixel number of 4 to 67 mega-pixels (MP). However, even 5MP Monitors with 165μm that can provide the current maximum resolution, still do not have enough resolution properties to meet the modality devices resolution.

Table1 Resolution of major mammo systems and a 5MP Monitor

When an image is captured by a modality device, most times the native resolution is higher than the resolution that monitor is able to reproduce. Consequently, either the overall image is converted to a lower resolution image with reduced quality, which is executed by viewer software (sub-sampling processing) or only a portion of the image is depicted with the original resolution. Fig.1 shows that the overall image is depicted on the monitor by only 31% of the information contained in the original image.

Fig.1 Depiction image when an original image consists of more pixels than a monitor in full-screen. It is reduced to only 31% of the original.

A monochrome monitor has a large number of pixel elements and each pixel element consists of three Sub pixels, which are driven as one pixel in conventional monochrome monitors. The technology we developed, Independent Sub pixel Drive composed of a monitor that comes with the Independent Sub pixel Drive algorithm and special viewer software enables each sub pixel to be driven independently, and consequently the monitor provides superior, lossless image reproduction. 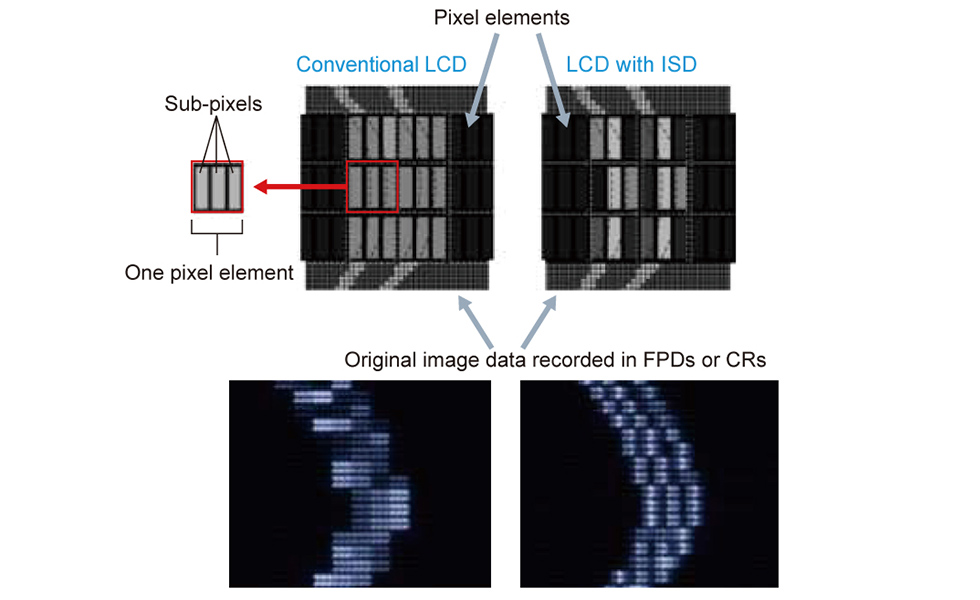 Fig.2 Mechanism of Independent Sub pixel Drive and comparison of the images of three fine lines

Fig. 5 shows the comparison of measured MTFs of the conventional 5MP LCD and MS-S500 that employ the same LCD panels of 5MP. As shown in the graph, the MTF of MS-S500 was improved obviously by the Independent Sub pixel Drive function.

Fig.2 Mechanism of Independent Sub pixel Drive and comparison of the images of three fine lines

While image quality of the medical monitors such as luminance, contrast, viewing angle, and grayscale features has been improved, resolution enhancement was not actualized because of its cost.
From the physical measurements and perceptual comparisons, this new resolution enhancement technology by the Independent Sub pixel Drive, which actualizes excellent depiction ability inexpensively, would be very important in softcopy diagnostic environment.

Q3 Does the ISD technology affect luminance of the LCD?

Q4 Is the ISD mode enabled by the ISD display or viewer software?

Q5 Does the ISD technology enable the three-times resolution enhancement by utilizing any LCD panel?

Q6 Is a special computer or graphics card required?

A1 No. JVC's sub-pixel technology is driven by activating additional horizontal sub-pixels, thereby increasing the density of the image (three-fold), while the aspect ratio of the native image remains the same.

A2 The resolution in the other direction does not change. However, the overall image is displayed properly through special processing.

Q3 Does the ISD technology affect luminance of the LCD?


A3 As the ISD display employs the existing LCD panel used in conventional LCDs, the overall luminance or contrast is basically the same as conventional LCDs. However, because the sampling density from the original image has changed, the luminance at the micro level is changed.

Q4 Is the ISD mode enabled by the ISD display or viewing software?

A4 Both. To display an image in ISD mode, the ISD display and customized viewer software are required.

Q5 Does the ISD technology enable the three-times resolution enhancement by utilizing any LCD panel?

A5 If it is a monochrome LCD with a regular pixel structure that one pixel consists of three sub-pixels, the three-times resolution enhancement is technically possible with the ISD technology.

Q6 Is a special computer or graphics card required?

A6 No. However, we recommend using a computer equipped with a high-speed processor because the amount of data is increased ninefold to use the ISD technology.

A7 The most current version of the ISD technology makes it possible to display 1276-step simultaneously grayscale.