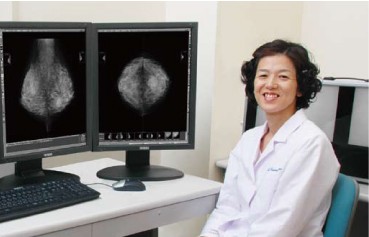 Development of medical treatment is a key role of university hospitals.

Please tell us about the current FPD mammography system.

With early FPD digital images, contrast of the mammary gland was painfully low and lesions were not enhanced adequately enough for them to be viewed clearly. The monitor manufacturer made numerous improvements, and now, we are satisfied with the image quality.

Please tell us how you have decided to deploy the super-high resolution digital mammography workstation into your facility.

The development and improvement such as new treatment methods and new medical devices are important roles for university hospitals. The budget is limited, but as I told, working closely with the manufacturer is very important for further improvement.
I am very familiar with the 15MsP mammography imaging system developed by Dr. Ichikawa in our university and I am also familiar with the manufacturer, JVC. I also knew its mechanism and its image improvement effects through the academic thesis and the exhibition. Subsequently we introduced it to our University Hospital for the purpose of image quality improvement.

Was there any concern in introducing the ISD technology since it was the world's first technology of its kind?

"Cooperation between the manufacturers was integral for our success."

You have installed the 15MsP super-high resolution mammography workstation from Climb Medical Systems Inc., and it was integrated with your current image management system from a different manufacturer. Please tell us about the current conditions.

We completed the digitalization of our department after the construction of our new central building. Subsequently, we deployed a filmless environment quickly and efficiently with help from other departments. Overall, it was a positive change that we executed fairly flawlessly. Softcopy diagnostics has introduced substantial improvements to our hospital as we predicted. Most of the old devices for film diagnosis environment have been removed, and now, we have enough space to work comfortably. We really don't want to go back to the old environment.

Was there any concern with deploying the super-high resolution mammography workstation?

Initially, we were using 5MP workstations that were manufactured by the same OEM as our Picture Archiving and Communications Systems (PACS). We were concerned that by installing the JVC Monitor System, we would have compatibility issues between the new monitors and our existing PACS. That wasn't the case at all. The new 15MsP monitor system perfectly integrated with our existing PACS.
We have introduced Climb Medicals' workstation only for mammography, and was attached to our current system which was manufactured by a different OEM. The DICOM standard made integration easy. However, when you have multiple vendors involved it has the potential to be difficult, and it wasn't.
As a result, the change was made successfully without any major setbacks and the system continues to operate properly.

Please tell us about your current mammography system using the 15MsP monitor. 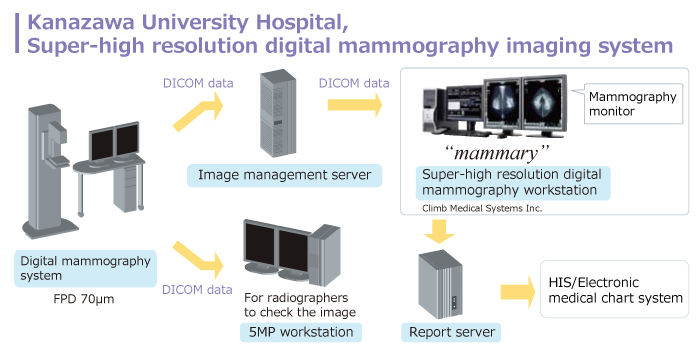 "We fully expected the image quality would be improved with the 15MsP."

This 15MsP monitor equipped with the ISD technology achieves three-times the resolution of today's most powerful monitor. Please share with us what you saw and experienced with the 15MsP

"In addition to the digital advantages, disadvantages against films are improving."

It has taken a very long time for digital imaging to catch up with the quality of film. JVC's ISD technology has brought us that much closer for confident softcopy reads. As previously mentioned, image quality can reach optimal levels when not only the monitor, but also the entire PACS system is also upgraded.
In addition to the overall efficiency that digitalization brought us, the image quality is now nearly comparable to film.

Thank you very much. We, as a manufacturer, are very glad to hear that. Considering the increase in image data, what is your opinion about the monitor speed of the 15MsP monitor?

Monitor speed has significantly improved. For example, it took much longer for the old workstations to monitor two different images on one screen at the same time. However, because of hardware and software improvement the monitor speed is much faster on the 15MsP monitor. Subsequently, it takes less time to interpret images. The amount of time it frees up is immeasurable and positive for increased workflow.

"Panning and zooming to find micro-calcifications can be intense and stressful.
JVC's 15MsP monitor alleviates that stress."

How exactly are you interpreting the image?

Basically, I use two monitors, dividing the two screens lengthwise to monitor four images. When I first open an image, I prefer to monitor it a bit smaller than fit-screen. Prior to having the 15MsP, I had to monitor the image at the same pixel size to detect small micro calcifications. Now with my new 15MsP, most of the micro-calcifications can be detected on the initial screen. Furthermore, in instances where the modality captured a poor images, we can still detect the micro-calcifications without zooming.

General speaking, would you say that our 15MsP system has exceeded your expectations?

Yes, I think so. Actually, I have no complaints.

Do you use the Zoom function at all with the 15MsP?

I zoom up the image later after all, but it is good that we are free from the stress that we have to magnify the image to find micro calcifications. I don't use the zoom function of viewer software application as I always lose where I'm viewing. In order to see the detailed image, I magnify the entire image and slide it to look at the entire image. This is much faster and makes fewer errors by virtue of oversight in my opinion.

You mean that you monitor MLO/CC images on divided four screens using two monitors, and then use the pan function to look at the image displayed on the divided screen. We think that it is perfect for the 15MsP monitor because it has less image degradation. 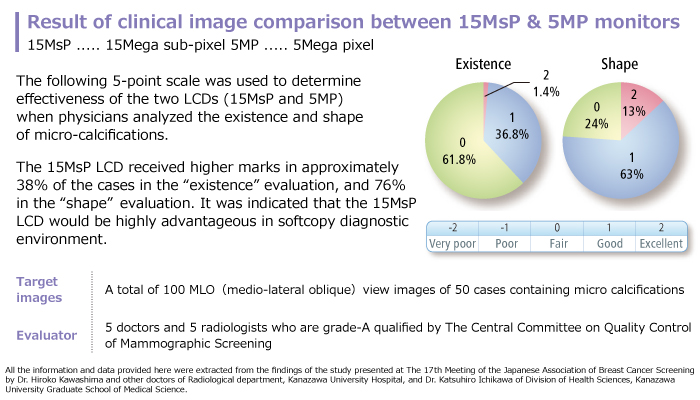 "It is important to pursue the further improvement and introduce the new technology.
I hope manufacturers can work more closely in a standardized way."

As I said before, at first, we were unable to obtain the high quality image when we just introduced FPD. However, as we work with the manufacturer, improvements have been made. Of course, we believe there is always room for improvement. It is important to continue development of new technology.

Digitalization has been deployed in most of the major facilities with success. Seamless integration among hardware and software systems is critical for that success. It is my hope that manufacturers work together to remove the barriers and strive for standardization.

Thank you very much for your time. 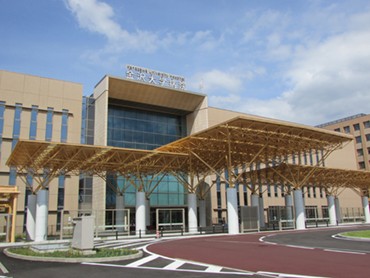 The central hospital of Hokuriku Medical District has 150 years of history and tradition that started when the Kaga Domain established the Vaccination Center in Kanazawa Hidoso in 1862. It's based on a basic philosophy of fostering medical care for people with a rich sense of humanity as well as providing the finest medical care.